The Fear of Winter: Book One in The Fear Of Series
– Now Available

The Fear of Winter: Book One in The Fear Of Series
– Now Available

A Haunting Crime Thriller for Fans of The Girl with the Dragon Tattoo, Gone Girl and Sharp Objects.

On a frigid December night, Megan Floyd vanishes from the mountain town of Fraser, Colorado. The extensive search provides no answers and as attention of her disappearance fades, the case goes cold. Her father, Tom Floyd, is forced to confront his worst fear that his daughter will never be found, and soon his life and marriage begin to disintegrate around him.

A year after the disappearance and with no new leads, Tom hires private investigator Marshall York, a former detective, and his assistant Hannah Jacobs. They soon start to uncover the secrets of Megan’s dangerous second life, all while fighting their own demons. Tom is guilt-ridden over a missing child case from his past, and Hannah is haunted by the unsolved murder of her older sister.

The case begins to consume all three of their lives, and as they dig deeper, they start to unravel the dark truth of what happened to Megan.

Breaking Bad meets The Basketball Diaries! Amazon Best Seller in Drug Dependency and Personal Health. Teenage Degenerate is a vivid, heartbreaking, and harrowing story that explores the depths of addiction. 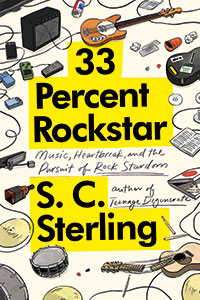 33 Percent Rockstar: Music, Heartbreak and the Pursuit of Rock Stardom is a Behind the Music for the vast majority of musicians who never achieve rock stardom and offers a glimpse of the lives of those pursuing the rockstar dream.

S. C. Sterling is a Denver Author originally from Portland, OR. His third book, The Fear of Winter, a fiction crime thriller, is scheduled to be released in January 2023. It is Book One in The Fear Of Series.

Non-fiction books include Teenage Degenerate, a memoir about drug addiction and growing up; and 33 Percent Rockstar: Music, Heartbreak and the Pursuit of Rock Stardom, a music autobiography about the vast majority of musicians who never achieve rock stardom.